I was so excited to get tourism vouchers in the 2nd round. I was only on the waiting list and thought I would miss out. After some research Ken and I decided to treat ourselves to a weekend away, not just an ordinary weekend spent “down the track” or in one of Darwin’s staycations, but to go somewhere that we would never have thought of going.

I don’t really know why, but Groote Eylandt jumped into our minds. Billed as a retreat, mainly for fishing, Groote Eylandt Lodge hugs the water and the beach. Cabins are dotted through the untamed bush, built up on stilts with boardwalks to link to a central restaurant, bar and pool area. It sounded divine and different.

We spent three nights there and with a bit of careful research we organised flights early on day 1 to return to Darwin late on day 4. Check out the flight schedules with Airnorth or keep an eye out for Groote Eylandt packages here.

Getting there
Imagine flying over Kakadu and Arnhem Land as the sun rises and crossing the pristine blue waters of the Groote Archipelago to land at a rustic, corrugated iron warehouse style airport. It is the fourth largest island in Australia, home to the Anindilyakwa People and mining which is a highly visible activity. The first thing we saw as we drove from the airport to the lodge was the building of a new road from the airport into town. You’ll never guess what they are doing! Replacing the main road and digging up the old road for the next manganese mining site. Manganese is everywhere and at very shallow depths, it has been the main economic driver for some 60 years.

Next we explored the lodge and surrounds (over a gin and tonic of course).

Our cabin overlooked huge boulders, pandanus and rock pools with the ocean as a backdrop. It was only a few minutes along the boardwalks to the bar, restaurant and pool so G&T in hand we sat for a while soaking up the views. Cloudy skies, with a threat of rain, kept the heat of the sun at bay so we headed off to the pool and ensconced ourselves under a palm tree. The pool was a delight, with boulders and tropical plants forming part of the irregular shaped pool. Slightly weird (but intriguing) was the view of the manganese cargo ship at the loading dock with more ships queued up and lining the horizon.

The Anindilyakwa Arts and Cultural Centre was just across the car park from the lodge. I visited 2 or even 3 times (not sure I can remember!!) and was hooked on the beautiful indigenous designs on the silk and linen dresses and scarves. I tried on something, wandered around and tried on something else!! I would have loved the $950 linen dress but settled for an unusual t-shirt in browns and beiges. Hanging on a rail behind the counter I ogled the gowns that were ear-marked for the Aboriginal Fashion Show – now I need to make sure I book some tickets for the August show. There were also loads of beautiful earrings – I resisted.

Day 2 was spent with Jon and his trusty Landcruiser ute. Ken and I piled into the front seat and off we went with Jon as our guide.

I got a real sense that for most of the day we were exploring behind the scenes of this huge island (50 kms by 60 kms). It felt a privilege to be there.

There are few roads so there was a bit of back-tracking and some off-roading. We even saw a beautiful frilled neck lizard pretending he was invisible on the tree trunk. A highlight for me was the Angurugu Cave Painting, a hidden treasure reached via a bush track, a river crossing and a bit of a clamber up the rocks. After the rock art it was off to the beach for a picnic and a rest!!

But before this finale we drove through several indigenous communities (where Jon fell in love with one of the puppies) including passing by a very colourful cemetery which was a mass of flowers. Another highlight was a beautiful historic mission church listed by the National Trust. In particular I loved the bell tower, a separate wooden structure where the weighted bucket moved the bell to ring.

Moving on, we visited one of the open cut mine sites. We drove along a parallel road and on the rises we could look down at the views. The mining is so shallow and the land so flat that the diggers and trucks look like tiny dinky toy diggers. So different to the huge monstrosities out in the desert at the iron ore mines. The port is also interesting with a long jetty of tracks and pulleys.

Back at the resort, the hub of activity, it was time for a pre-dinner drinks and sunset. In the tropics the setting sun is a major attraction. There are not too many places in Australia where the brilliant yellows, reds and oranges collide and clash with the black and grey clouds.

We visited the resort early in January and they hadn’t commenced their a la carte menu so we mingled with the mine workers (lots of fun) and were tempted to feasts of steaks with piles of vegies and potatoes. Luckily for me there was also fish, chips and salads. We catered for ourselves at lunchtime with snacks from the local supermarket.

The next couple of days were spent reading, relaxing, swimming and generally just hanging out. And Groote Eylandt was a perfect destination to do just this. However, Ken did manage to get a game of golf in on the Sunday at the local Golf Club – the course is in a stunning location overlooking the beach and the port. I stretched my legs and walked.

Three nights and four days later we boarded our late flight back to Darwin. It was pitch dark, pouring with rain with thunder and lightning surrounding us. It was a juggle between exciting and scary.

What next …….. we are booked into Hideaway Litchfield with the next round of vouchers. But more about this in the May edition of the blog. 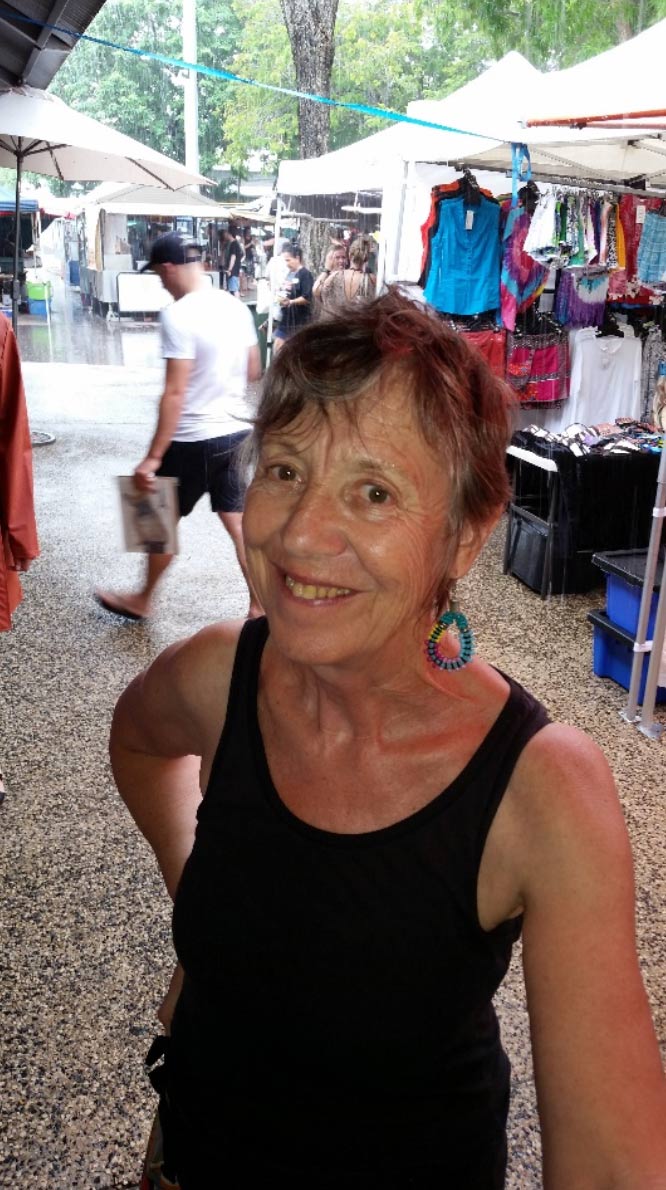 All about Sue
Sue is absolutely passionate about living in Darwin. She says "It is the best place I have ever lived". She has published three guide books with her new book “Darwin for all Seasons” just being published. Sue has a background in travel and tourism, owning her own tour guiding company in Sydney and in her books, she captures a really intimate view of Darwin and the Top End with her own personal tips and local haunts.